Upcoming update and map of Thule

Hey everyone!
We didn’t update blog recently for a certain reason — it was some hard time of preparations for an update which will come most probably today.
You can read announcement on you forum with general information, while here I’ll tell you about some things that were not mentioned in update info.
As we announced before we’ve been working on optimizations, and part of them will get in this update. You will not notice most of them currently as they affect game database. We’ve completely remade the way we store data about characters — well, not all of it, but some parts. According to our tests it affected entire game and specially loading and creation of character. So we will keep an eye on it and go on with fixes.
The main visible change is announced option for effects — you will be able to select what effects you want to see (your group, all characters and so on). Switching it to «my group» will affect game performance a lot, so we recommend it for all mass-PvP events.

And now for something completely different. New battle for cash will launch its first stage this Sunday, and you can have a glance on the map on Thule island. 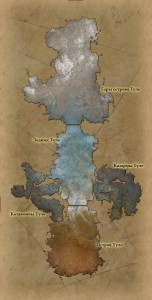 It will consist of 5 connected locations. They are rather big so we added teleport stones allowing to move a bit faster. Entrances will appear in Fragotown but will stay closed till the beginning of event.